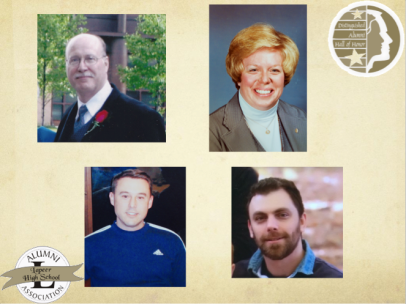 Lapeer Community Schools and the Lapeer High School Alumni Association are proud to announce inductees for the 2014 Distinguished Alumni Hall of Honor: Patrick Smith (Class of 1968), Geraldine Hammill (Class of 1968), Bill Kinzer (Class of 1986) and Jason Rogers (Class of 1994).

All of these inductees have distinguished themselves as tremendous stewards of the education and training they received from Lapeer Community Schools; they are role models for all students.

Patrick Smith, a 1968 graduate of Lapeer High School, went on to study at Michigan State University where he earned a Ph.D in Chemistry and spent two years as a research assistant. Smith worked for Dow Chemical in Midland for 30 years including three years as a lead scientist for Global Dow Analytical Sciences. Smith, a Midland resident, has served as past chair of numerous national meetings of the American Chemical Society (ACS) and has been a member of the Advisory Board of the New England Green Chemistry Consortium. He has been an adjunct professor at Central Michigan University and has received many distinctions including the ACS Award for Outstanding Achievement and Promotion of the Chemical Sciences.

Geraldine Hammill, also a 1968 graduate of Lapeer High School, spent 37 years in public education as teacher and counselor. She died in 2009 at the age of 58. After graduating from Eastern Michigan University, Hammill worked in public schools across southeast Michigan, including 23 years as a guidance counselor at Goodrich High School. She also spent 10 years teaching adult education in Lapeer. Hammill was very active in her community as a leader for the local American Cancer Society. She was also involved in numerous student-centered organizations that served the community.

Bill Kinzer, a 1987 graduate of Lapeer East High School, is a longtime teacher and coach in the District. Kinzer started his career in Lapeer in 1992. During his career he has taught and coached at White Junior High, Lapeer East and Lapeer West. He earned degrees in the Art of Teaching and History from UM-Flint, Oakland University and Marygrove College. In addition to his work as an educator, Kinzer has been the driving force behind successful sports programs in soccer and basketball. He is arguably the most successful coach in the history of Lapeer East High School, winning 15 league titles in his first 20 seasons as varsity girls’ soccer coach. Kinzer, a Lapeer Resident, has also served as an OMNI Council advisor, an assistant athletic director and a union representative.

Jason Rogers, a 1994 graduate of Lapeer East High School, is the owner of Rogers Pharmacy in downtown Lapeer. Rogers, a Metamora resident, graduated from Ferris State University College of Pharmacy in 2002. He saw the need for a service-oriented pharmacy and ultimately set up shop on West Nepessing Street in the former home of Rite Aid Pharmacy in July 2007. Rogers has been a member of the Board of Directors of the Michigan Pharmacist Association, the Michigan Society of Community Pharmacists, and the Lapeer DDA. He was honored for his relief efforts in the wake of Hurricane Katrina.

The Distinguished Alumni Hall of Honor program is cooperatively sponsored by Lapeer Community Schools and the Lapeer High School Alumni Association.  The award was created to recognize and honor the accomplishments of the outstanding men and women who graduated from our schools.  By celebrating these role models, we inspire today’s students to move forward in their own pursuit of excellence.

A ceremony will be held in their honor at 2 p.m. on Sunday, Nov. 2, 2014, in the Irwin Board Room at the Administration and Services Center, 250 Second St., in Lapeer. The event is free and open to the public. Light refreshments will be served.